The most romantic river landscapes in Germany.

The Tour by Bike an d Boat goes along the winding course of the Moselle from Koblenz to Trier and back again. On carefully selected cycle routes, this delightful region opens up to you much more than if you were just going on a cruise.

The bike excursions lead along vines of steeply slopes and through picturesque wine villages. Castles and monasteries line the river and after every bend a new panorama invites you to pause and enjoy. You keep coming back on board your cruise ship in the afternoon. There is no more comfortable way to experience the cultural and natural landscapes of the Rhine and Moselle. Experience the landscape and culture along the Moselle at the highest level.

A successful concept at terranova since 2004: Your room will travel with you on this tour! We have combined the river cruise on a comfortable ship and e-bike excursions with terranova to create an enjoyable bike cruise for you. It is wonderful to return to the comfortable cabin on board the ship after an eventful day of cycling! In the evening the way to the on-board restaurant is not far, where you can relax and enjoy dinner and the river landscapes of the Moselle and Rhine leisurely pass by in front of the window.

*All distances are approximate. The itinerary is subject to change, at times without prior notice. Some waterways may be subject to occasional closures due to drought, storms, floods, canal or lock repairs, or other unforeseen circumstances that make navigation unsafe or impossible. The captain reserves the right to make any changes deemed necessary.

DAY 1: ARRIVAL IN COLOGNE
At 1.30 p.m., your tour guides will be waiting for you at Cologne Central Station to collect your luggage and bring it to the ship. Cologne's history goes back to Roman times, but it wasn't until the Middle Ages that Cologne became a cosmopolitan city. Numerous Romanesque churches and the cathedral bear witness to this. In 1248 the foundation stone of the cathedral was laid, which should not only be the official church of the Archbishop of Cologne, but also one of the most important pilgrimage churches in Europe due to the relics of the Three Kings. Due to a lack of money, the construction stalled and the building of the cathedral could only be completed in 1880 by the Prussian king! Be amazed not only at the huge walls and dimensions of the cathedral, the furnishings are also precious and unique. You can admire the detailed carving of the choir stalls, the mastery of Stefan Lochner on the altar of the Cologne city patron or the artful mosaics from the 19th century. You board the ship around 4 p.m. and the A-ROSA SILVA will cast off at 5 p.m., while you can move into your cabins before dinner. At night you drive upriver via Koblenz in the direction of Cochem.
Dinner and 1st night on board.

Please note: For special events in Cologne Cathedral, a visit is not possible on the day of arrival. In such a special case, we will only visit Cologne Cathedral on the 6th day of travel before your departure.

DAY 2: FIRST GREETING TO THE GREEN VINE SLOPES OF THE MOSEL 40 km
In the morning the ship docks in Cochem - the mighty castle towers over the place and dominates the lovely river valley. The first leisurely bike stage to get in the mood to Zell (Mosel) starts directly from the ship. Green vineyards greet you and will accompany you over the next few days. The cycle route leads along the bends of the river, completely flat. You pass the romantic village of Beilstein, towering high above the ruins of Metternich Castle. Shortly afterwards, the impressive Moselle slope of the Bremmer Calmont lies in front of you. The “hot” mountain is considered to be the steepest individual vineyard in Europe and a particularly good Riesling grows on its slate slopes. Here, as for centuries, the winemakers are still dependent on manual labor and muscle power. After a picnic lunch, you can easily follow the course of the river on your e-bike and you will be in Reil in the afternoon. Here you will learn about a friendly winemaker, during a wine tasting and about his daily work. Your tour guides will then take you back to the ship in Cochem by terranova bus. Enjoy the deep evening sun at dinner while the SILVA glides through the river to Bernkastel-Kues.

DAY 3: HOLY NICHOLAS & THE MAARE-MOSEL CYCLING TRAIL 58 km
Today starts with a walk through the pretty Bernkastel-Kues. You will also get to know Nicolaus Cusanus (von Kues). The medieval church philosopher was decades ahead of his time: long before Copernicus, he overthrew the Ptolemaic worldview and nevertheless became the Pope's deputy.

Nikolaus von Kues (Cusanus) has thought about the age-old question of mankind, who gives people power to rule over other people, since all people are by nature free.
To this he gives an answer that is still unreservedly valid today: “But the law should be enacted by those who oblige it, or by the majority of those who have been elected by those subject to the law ... because: as far as everyone is concerned, must be approved by everyone ... "

You can take the bus to today's bike start in Daun in the Eifel. Today's Maare-Moselle cycle path is one of the most beautiful railway cycle paths in Germany. On the disused route, the Daun cycle path leads through the mountains of the Vulkaneifel, over viaducts and through long tunnels back to the Moselle. The part of the Eifel, shaped by volcanism and the maars, is gradually being replaced by the cultural landscape of viticulture. The vineyards on the Middle Moselle are so steep that winemakers become mountaineers. At the lunch picnic you can thank you for the dry Riesling.

DAY 4: RUWER, ROMAN VILLAS & TRIERS IMPERIAL GLANZ  39 km
In the morning the SILVA moored in a small wine village outside of Trier and you will soon be amazed about the remains of a Roman villa. In order to recover from the lush city life, the Romans built magnificent country villas here in a graceful landscape. After a few kilometers along the winding Moselle, you will reach the mouth of the small Ruwer river. On an old railway line you slide into the green Ruwer valley. The water power of the lively river was used here as early as Roman times. The Roman Ruwer aqueduct supplied ancient Trier (Augusta Treverorum) with water from the Ruwer. During the well-deserved lunch picnic, your tour guide will tell you about the university town of Trier. After the break, the route leads in serpentines into the middle of Roman Trier. During the descent you will always have fantastic views of Trier. Once there, imperial splendor unfolds! In Roman times the city was the imperial residence and capital of the Gallic province. During a guided tour of the city you will be amazed at the evidence of the rich past.

DAY 5: ALONG THE TERRASSENMOSEL TO THE GERMAN CORNER  30 km
You follow the Moselle very flat, past old wine terraces and medieval castles. The vineyards are particularly steep on the Lower Moselle. It doesn't need to be explained to the wine connoisseur that the steep slopes mean that the power of the sun is approaching. What is known as the equator effect is the multiplication of the sun's radiation intensity. On particularly steep slopes, it corresponds to locations that can be found up to 1000 km further south! In the center of the Lower Moselle, people like to quote the sun temperatures, which allow an almost Mediterranean flora and fauna here. The Moselle and Rhine converge at the Deutsches Eck. The monumental equestrian statue of Kaiser Wilhelm I was erected here in 1897. Before we enjoy the last evening on board together, you will learn more about the symbol of the patriotic Rhine romanticism ’from your guide. Even years after the Federal Horticultural Show, Koblenz is in full bloom. With a colorful bouquet of colors, shapes and ideas, the garden show changed the face of the city for the long term. The romantic palace garden was awakened from its slumber during the redesign! Final dinner and 5th night on board.

DAY 6: DEPARTURE FROM COLOGNE
Today the cruise ends and you leave the ship at around 9 a.m., so that you can comfortably start your journey home by train / car.

EBIKE TRIP - ROUTE ASSESSMENT: The cycling route is a total of 167 km. The bike routes are not short, but with a few exceptions run on paved and car-free bike paths! They usually follow without ascents along the rivers or on old railway lines. On the Moselle and Ruwer as well as on the Maare-Mosel cycle path through the Eifel, cycling is a carefree pleasure.

Live comfortably on the ship: Your room will accompany you on this journey! The A-ROSA SILVA is one of the newest ships in the fleet and was only put into service in 2012! A state-of-the-art river cruise ship with a lot of comfort and space. At 135 m in length, the ship offers a generous design of the public areas: a spacious sun deck, outdoor pool, outdoor SPA area, saunarium, indoor and outdoor restaurant, putting green, etc. on the upper deck, plus a bar, café, lounge and fitness area on the ship. The cabins are spacious, modern and comfortably furnished, equipped with individually adjustable air conditioning, bath / toilet, TV and hairdryer. The windows on the C-deck with the French balcony can be opened. The SILVA also offers 6 very spacious suites.

Ship details of the A-ROSA SILVA

Deck 1: cabin categories S and A

THE BEST ESCAPE OF EVERYDAY LIFE: ON THE SHIP

FEEL AT HOME ON HOLIDAY: THE CABINS

IT FEELS LIKE A HOLIDAY ON HOLIDAY: THE SPA-ROSA

Further information on the ship's equipment and the many services included can be found in the detailed travel information, which you can request without obligation. 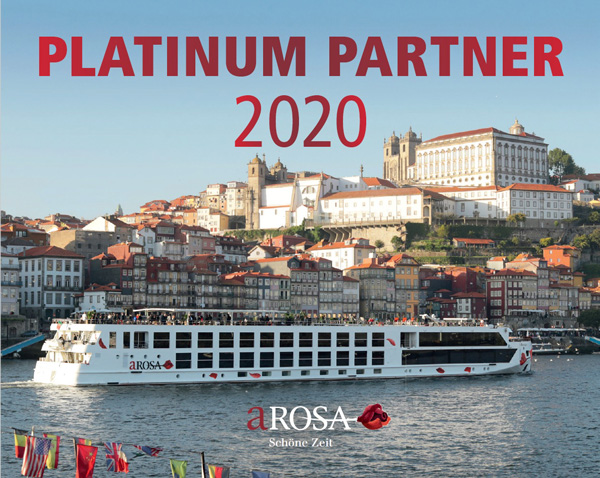